Share |
Here are a few cards for you, created by some of the demonstrators on our team (they brought these by at our most recent group meeting):

Jacqueline brought a card she made at Sarah's workshop, using the SAB set "Very Punny" - the fish shows through a circle punched out of the front, and he's covered in Crystal Effects for a shiny appearance! 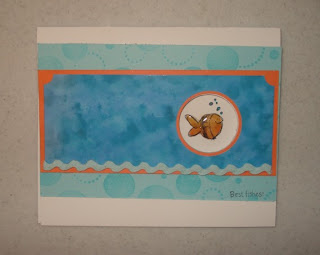 Laurie's card really is mind-boggling when you think of all the cutting involved in doing the border, but WHAT an awesome effect! You can't see it in the scan, but the wee letters are all raised on Dimensionals too -- wow. 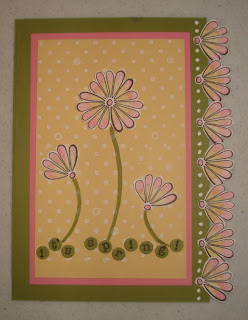 Ardyth's card has a great border as well...I had never thought of using that stamp in that way but I love the effect. 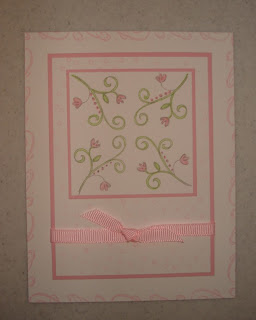 Ahhh....Crab & Company! I can't wait to get my hand's on this set too :) Ardyth's second card convinced me I *need* it sooner rather than later. 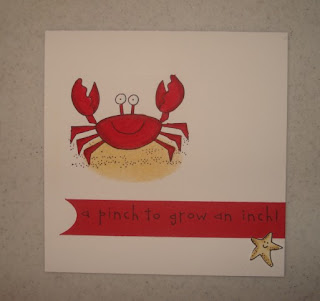 ETA: Jacqueline's card uses the pretty "Flirty" ribbon from the Winter mini catalogue -- it's such a shame that this one is no longer available, since I loved it. The Bodacious flower has been trimmed out and mounted on Stampin' Dimensionals for extra effect. 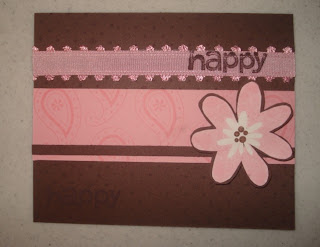 Last but not least today is Ardyth's 3rd card, inspired by an American Doll advertisement. It's an unusual colour combination but I think it really turn out nicely. 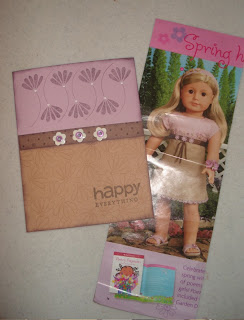 Later on this week I'll post the other cards from Saturday's Hodgepodge Hardware class as well as some other Spring Mini card samples I've received!

posted by Caroline LeBel, Stampin' Up!® Demonstrator @ 8:25 am

I think the pretty nameless card is by the new mom ... Jacqueline ??

Wow these are so super. Lucky you! :)

These cards are great! What set did Ardyth use on the pink card? I would love to know, I think I need that set.