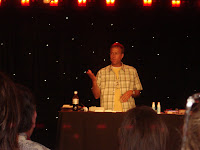 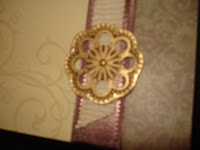 ...demo'd by Brent Steele seems to be generating some buzz :) Let me explain how I remember him doing it. Basically the "medallion" was created using the faux-metal technique:

1) On a piece of Whisper White cardstock, he dumped out a small pile of gold embossing powder, and then he pressed down the flat part of the lid down on it to create an even surface.

2) He then heated the pile of EP with his heat gun FROM UNDERNEATH the paper! Yes, he held it up flat and pointed his gun from underneath, and it sloooowwwwwwly melted it into a puddle of liquid gold. He assured us all that no, the paper would not burst into flame as long as you're not touching the gun to the paper.

3) He pressed the new stamp straight into the melted ep WITHOUT VersaMark'ing it. The stamp still extricated itself fine once the ep had cooled into shape, and the shiny surface was not dulled by any residue of VersaMark.

4) He trimmed along the outer image of the stamp and then hole-punched the inside areas to create an embellishment that he added to the card (BTW, did you see the stinkin' cool new ribbons coming soon??? ooowwweeee!)

Anyhow, I hope my explanation did justice to it. My hubby came along to watch and he thought it was awesome, too (maybe because of the "power tools"? LOL!)

Comments:
That sounds pretty cool - might be worth trying!

Which stamp is it?

Thanks for letting us know how is was done. It really is pretty.

This is too cool. Thanks for the info!!!!

Thank you so much for your directions! I am pre-ordering this set, and I can't wait to try this!

Your blog keeps getting better and better! Your older articles are not as good as newer ones you have a lot more creativity and originality now keep it up!