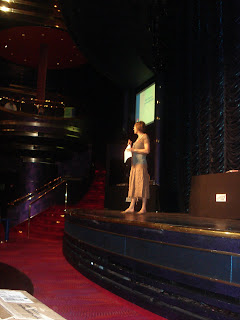 This morning we attended our General Session meeting in the Vista lounge... I brought Brent along so he that could get a better understanding of the business side of SU. He thought it was great to hear statistics and number-crunching stuff from the financial officers -- it gave him a totally different perspective on the biz.

My friends Shannon Thibault and Nancy Gauthier both managed to win prizes while we were there -- yippee for them :)

After General Session was over, I had Pat's "Wow" swap to go do... in the hallway by her cabin. How fun was it to swap with 75 women down a giant line :) The poor rooms stewards and people trying to get past us probably thought we were nuts! 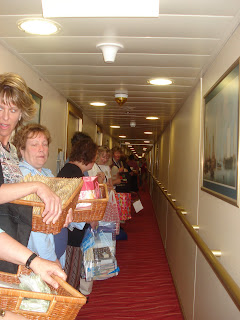 I had tried to help organize a Canadian Mix & Mingle for the Canucks on board, which was quite the logistical nightmare. We started out in the Crows Nest on the 10th deck but got kicked out when they wanted to start setting up the Spouse's meeting.

That's okay... we still had a blast schmoozing and getting caught up with each other. Yes, I got some razzing for my patriotic Canada shirt but hey! I love this kind of stuff :) For many of us who chat online and live in opposite ends of the country, it's one of the few times we can connect in person. And for the record, Carmen's husband Del even had a "I am CANADIAN" shirt on too that he posed in - hilarious!! So I'm not the only proud Canadian around :) 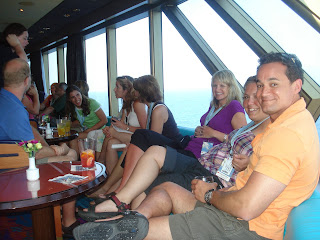 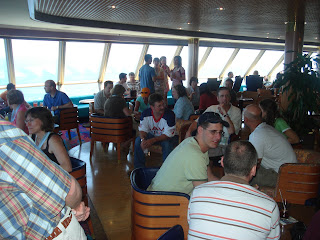 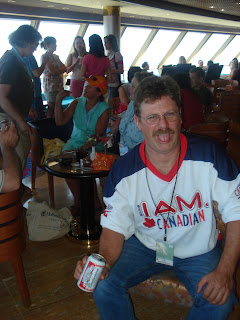 Once the staff threw us out (the nerve!), some of us headed down to the Piano bar to continue our gabfest and even managed a small group photo op with Shelli. It was a great afternoon amoung friends! 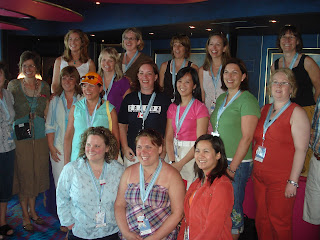 Comments:
Love looking at all your pic's and reminicing....Just for the record though that's not my hubby with the shirt on :) I think he's another Canadian Carrie's man :)
My hubby wanted to bring his Canuck's jersey but I veto'd him saying it was going to be 90 degrees there and it took up too much precious suitcase room! hahaha
I love the pic of your swap - too funny!
Kerry (in Abbotsford, B.C.)