It's nice to report that I'm officially here in Saint George for this year's Founders Circle trip. All of yesterday was pretty much spent either in airports or in the air, which was both good and bad. The first leg of our journey was a fairly uneventful 5 hour trip from Toronto to LAX non-stop, where Nancy Gauthier and I watched "Sex & The City" and chatted happily. We lunched at the airport and awaited our next flight that would get us to our final destination. Oie-oie-oie! I won't say that we were clutching each others hands and praying for our lives, but it felt close! I'd never been through turbulence like that before, and when you look out of the window and see nothing but mountains and deserts below, well, you just plain stopped looking after a while! 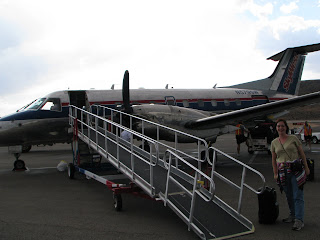 Anyhoo, we were finally on solid ground (practically kissed it in gratitude) and we checked in to our hotel, grabbed some dinner at the Olive Garden and then went to play at Tar-zhay for a while. When you set 2 Canadians loose in that store, much hilarity and $hopping will follow!!

So now we're both up bright and early since we're still on our Eastern timeclocks, and we're counting down the minutes until the hotel's breakfast opens at 6:30am. The rest of the Stampin' Up! gals will be coming in today to kick off the FC festivities, and I'll report back on some of the great cards and swaps I get.

Until then, happy stamping!

posted by Caroline LeBel, Stampin' Up!® Demonstrator @ 7:44 am

Comments:
Glad to hear you arrived safe and sound. That turbulance thing should be outlawed.